Victorinox Outrider Swiss Army Knife 54731 is your pocket knife if you like the feel of a lock blade knife with all the classic Victorinox features.

This reliable Victorinox pocket knife has a large blade along with a rough wood saw for cutting trees, bushes, and twigs for a cozy campfire. Victorinox, the designer of the first Swiss Army knife, crafted this pocket knife to house all the necessary resources for your everyday use.

The Victorinox Outrider Swiss Army pocket knife contains more conventional equipment than most Swiss Army knives, including scissors, a can and bottle opener with screwdrivers, and a long and short Phillips screwdriver, both of which are suitable for emergency and simple fixes.

Victorinox Outrider Swiss Army Knives are made of first-class stainless steel and come with a complete manufacturer’s warranty.

Compare to other Swiss Army Knives ->

OpticsPlanet is the Destination for Gear™ and one of the largest internet retailers in the United States. Founded in 2000, OpticsPlanet has been offering a diverse product selection for those who play, work, and serve with passion, with the best brands in optics, gun parts, ammunition, hunting gear, outdoor and survival gear, apparel, footwear, and hundreds of other categories. 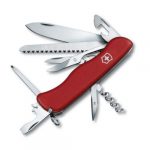