Day trip from Skopje to Ohrid

Take a full-day trip from Skopje to Ohrid, Macedonia’s top tourist destination known as Balkan Jerusalem. Stop in Mavrovo for a trip to St. Jovan Bigorski, then explore Ohrid and see and hear about the main attractions of the stunning lakeside area.

Day trip from Skopje to Ohrid

Take a full-day trip from Skopje, the top tourist destination in Macedonia known as Balkan Jerusalem. Stop in Mavrovo for a trip to St. Jovan Bigorski, then go to Ohrid and see and hear about the key sights of the lovely lakeside area.

It takes about two hours to drive from Skopje to Ohrid. On arrival in Ohrid, you’ll begin a visit to St. Sophia’s Cathedral, which dates back to the 11th century. You’ll then head up to the Roman amphitheater, then continue walking to the Icon Gallery, home to some of the most prominent and important icons in the world, right after Athos and Russia.

You’ll continue the day trip to Ohrid by visiting the Church of St. Clement. This one dates back to the 13th century and has some of the most magnificent and sacred frescoes from the 13th century, not only in this country but throughout the Balkans. After that, you will continue walking to the fortress of Tsar Samoil, named after the first tsar of the Macedonian Slavs who, having conquered Byzantium, brought most of Macedonia under his control.

Then you will travel to Plaoshnik, where you will see the newly built monastery church of St. Clement. Dedicated to St. Clement-the patron saint of Ohrid-and St. Panteleimon, it stands next to the original site of St. Clement’s University, the first Macedonian Slav university established in the 9th century A.D. You can also see the crypt inside the church with the remains of St. Clement. Beside the church, you can see the ruins of the 5th-century basilica with perfectly restored mosaic floors and some swastikas still find on the walls.

From here you will continue your day trip from Skopje to Ohrid towards St. John’s Church in Kaneo, which was built at the end of the 13th century, and is one of the most frequently visited churches in Ohrid due to its beautiful location on the cliffs directly above the bay.

After that, you’re going to go back to the center on foot. Another choice is to go back to town by boat and at the same time take a tour of the bay, giving you a nice view of the city. You will return to Skopje after a short break and end your day trip from Skopje to Ohrid.

Compare to other day trips from Skopje ->

GetYourGuide is on a journey to transform ordinary trips into extraordinary trips. They're your guide, bringing personal experiences to you. Wherever you fly, they will show you the special and unmissable stuff to do at your destination. With GetYourGuide on your hand (and your pocket), it's never been easier to create unforgettable moments. Today, millions of people have used GetYourGuide to turn their travel fantasies into reality. They're transforming the way people relate to the destinations they're visiting so that everyone can make their dream holiday. It's your path. It's your way. 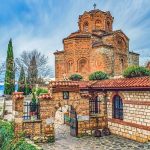