Know (and taste) that Czechs are drinking more beer than any other country in the world! Hint, it’s much more than Pilsners! You will also taste some local food on this 4-hour Prague Craft Beer & Food Tasting Tour.

Prague is synonymous with beer, yet few visitors can sample anything more than the pilsners that the Czech Republic is so well known for.

You’ll sample everything along the way, from light Czech pilsners and heavier dark lagers to little-known local craft beers. And of course, you’re not leaving hungry! Such Czech beers will be combined with local and foreign treats that genuinely bring out the distinctive characteristics of each bottle of hoppy goodness.

You’ll also be treated to breathtaking views of the City of the Hundred Spires, plenty of cultural and historical details about the neighborhoods you’re touring, and of course funny stories from your personal tour guide along the way.

Eating Europe is thrilled to have partnered with Evan Rail, an international beer expert, to create this unique Prague Craft Beer & Food Tasting Tour. Evan has been featured on No Reservations by Anthony Bourdain and has written several books on craft beer as well as articles in the New York Times.

There’s no better Czech beer connoisseur than Evan – so we’ve teamed up with him to pick the most important breweries in the region, as well as the most authentic places to enjoy in Prague for the Prague Craft Beer & Food Tasting Tour.

More things to do in Prague ->

Eating Europe is giving people a taste of Europe they’ll always remember by introducing them to real food, people, and communities.

Eating Europe’s mission is to leave visitors with unparalleled, non-tourist, food-related experiences in the undiscovered communities of the most interesting cities in the world. 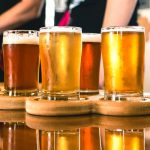