Day trip from Tirana to Durres

Go on a day trip from Tirana to Durres. Explore the histories of Durres and Tirana, two important cities in Albania with a rich past and culture.

Day trip from Tirana to Durres

Take a day trip from Tirana to Durres. Explore the history of Durres and Tirana, two important cities in Albania with a rich past and culture.

Explore the ancient city of Durres, the second-largest city in Albania, and Tirana, the capital of Albania.

Begin your day trip from Tirana to Durres with a drive to the city of Durres. You’re going to travel 33 km west of Tirana. Due to its geographical and climatic position, Durres, better known as the Antique Dyrachium, was a strategic location on the eastern coasts of the Adriatic and in the southern Illyria.

The tour of the Old Town will include the ruins of the city forum, the Roman baths, the city center, the Town Hall, the Roman Amphitheater, the Byzantine walls, the Venetian Tower, and an archeological museum with a panoramic view of the discoveries and urban planning of this once important city.

We’ll continue our trip back to Tirana after the tour. Explore the capital city of Albania, including some of the historic highlights of the city center, the Skanderbeg Statue, the Et’hem Bay Mosque, the Clock Tower, the Italian Governmental Institutions Buildings, and the vibrantly colored ex-communist buildings. And so, our day trip from Tirana to Durres will end.

Compare to other Durres tours ->

GetYourGuide is on a journey to transform ordinary trips into extraordinary trips. They’re your guide, bringing personal experiences to you. Wherever you fly, they will show you the special and unmissable stuff to do at your destination.

With GetYourGuide on your hand (and your pocket), it’s never been easier to create unforgettable moments. Today, millions of people have used GetYourGuide to turn their travel fantasies into reality. They’re transforming the way people relate to the destinations they’re visiting so that everyone can make their dream holiday. It’s your path. It’s your way. 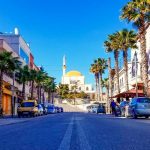