Private Easter Island Tour. Stop overcrowded Easter Island tours on this private island tour that requires round-trip transportation from your hotel. It’s great for tourists who are low on time, as it packs a lot of highlights in just one day.

See Vinapu, Ahu Akivi, Rano Kau, Puna Pau, Orongo, and Ana Kai Tangata cave. A guide teaches you ancient tales as you travel, like a fascinating one on cannibalism.

Compare to other Easter Island tours -> 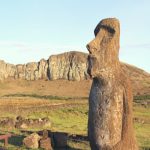